Life With The Dorts

My husband is loud. Like, so loud. His loudness knows no boundaries or borders but sometimes he does have a different volume setting. Louder. Now this volume setting usually comes to life while enjoying one of his biggest passions which just so happens to be basketball. We live in Utah so we love our Utah Jazz and have been so fortunate to attend quite a few games this season. The past few years have probably been some of the harder times we’ve experienced so on the nights we have Jazz tickets we schedule a babysitter and I actually do my hair and makeup. We get ourselves some food and get to eat it while its still hot because we aren’t busy feeding our kids and we head to the arena. These nights have turned into my favorite nights. There is however part of the night that always puts me just a tad on the edge of my chair and it sounds like this, “C’MON REF! WHAT KIND OF CALL IS THAT? FOUL! FOUL! SOMEONE BETTER CALL THE COPS BECAUSE THAT DUDE JUST GOT ROBBED!” So while my husband stands screaming, you can generally find me pulling at his sleeve saying “Babe, sit down. Don’t scream.” And when that doesn’t work I just place my chin on my hands and wait until he’s done.

I’ve always been very aware of what others think of me, and in some situations I don’t care but in a lot I do. Is that a good quality? No. Do I wish I didn’t? Absolutely. But the reality is that anytime someone is whispering even if they accidentally glance in my direction there is a good chance I’m going to feel like it’s about me. Queue me checking my teeth for food and smelling my own armpits. So I think it’s fair for everyone to safely assume that when I KNOW those glares are about me, my discomfort level goes through the roof. That being said, it’s no surprise that the other nights game pushed me over the edge.

We got to the game both in great spirits, so excited for our night away and time together. We found our seats and immediately I started feeling sick. This baby guys, she’s getting the best of me regularly, especially in large crowds where there are so many things to smell. Anyways, the game started and my husband was immediately in the zone. I attempted to pull on his sleeve a few times, I tried telling him to shush, I even told him he was being way to loud and needed to be quiet. When nothing worked I sat back in my seat and tried not to throw up. All of the sudden out of the corner of my eye I saw a woman lean over and whisper to her husband while looking at me following one of my husbands cheers. My stomach turned, I knew she was talking about us. “Please sit down babe” I said. He just smiled and said “babe, I’m enjoying my night! It’s okay!” He was right. I was probably making assumptions anyways. I sat back in my chair again. Another yell “ATTA BOY! WAY TO GET TO THE LINE!” Again another glare and a whisper to her husband, but this time she rubbed his back and laughed as if trying to calm him down while he simultaneously put his finger in his ear closest to us. This was for sure about us and the discomfort set in again. They took a selfie of them at the game, she showed her husband the Instagram post, they both laughed, her husband said “seriously” and rolled his eyes and then she looked back at me laughing.

And so this pattern continued for the duration of the game. Loud yell, followed by glares, laughing while rubbing her husbands back with frequent exclamations of “oh my gosh” or “woooooow!” I continued to tap him on the leg, pull on his arm, ask him to sit down and be a little more quiet while my anxiety built higher and higher. Finally my husband asked me what was wrong. I didn’t hesitate, “that woman down there is so rude! She’s constantly making comments about you and your loudness and constant commentating . She keeps glaring back at us and it’s making me mad and very uncomfortable! He sat down, grabbed my hand, kissed me and said “if that’s how they want to enjoy the game then let them, you enjoy it how you want to. Don’t let them decide how your night goes. Just enjoy it.” Then he said “I don’t even know why I sit down” and jumped back up without missing a beat. “YEAH! MAN I LOVE ME SOME GEORGE HILL.”

While I’m a little embarrassed to admit it, I was heated but I’m going to blame it on my extra dose of hormones. I was so overwhelmed over something so small that my heart was beating out of my chest. I was frustrated with my husband for being so stinking loud and at that woman who was being so rude! I was already not feeling well and in my usual position on the edge of my seat ready to control his outbursts and she was just making it worse. I mean couldn’t she just have been like everyone else and just watched the game in her own fashion my husbands very obvious passion aside without being rude to other people?

I excused myself to go to the restroom, not because I actually had to go but because I needed a breather. I sat in the stall frustrated and all of the sudden reality settled in and I felt awful. My husband was loud and it was obnoxious sometimes but what others didn’t know is that those games are our break from a reality that isn’t so hot most of the time. He wasn’t doing anything wrong. He wasn’t sitting in an opera or a symphony concert hall. He was at a sporting event that he just so happened to love and was acting extremely appropriate for the setting he was in. He wasn’t vulgar or out of line, he was loud and that wasn’t hurting anyone. Then reality set in further, how long had I been trying to silence my husband or diminish his personality because I felt it was over the top when in all actuality it just wasn’t what I would say or do. I was horrified with myself. I sat trying to think if there was anything about me that my husband was constantly trying to change or telling me he didn’t like, I couldn’t think of a single thing. I sat there in a stall at a Utah Jazz game realizing that while my husband had excepted me 100% for who I was a long time ago, I needed to improve as a wife.

I suppose I should take a second and say that there are things in a relationship that should not be accepted or deemed appropriate. Examples may include any type of abuse, a lack of support or help in your home and family etc. This article however isn’t about those things. I once heard a quote that said “You don’t have to love his passions, but you have to love that he loves his passions.” I can think of many things in my relationship that this quote applies to, his choice of music sometimes, his love for YouTube videos, his raw sense of humor, but those are part of who he is and I love who he is. My husband accepted my love of Desperate Housewives and Oreo obsession the day he met me. He accepted my absolute distaste for vegetables and my ugly cry and lack of using actual words when I’m mad. He loves me despite my inability to wash the clothes and fold them in the same day and my habit of being overly patient with my children even when they deserve some harshness in their lives. The point is that there are so many things that I do that could leave him sitting on the edge of his seat ready to control me but instead he loves me, not in spite of those things but because of those things.

Since I’m a sucker for happy endings let’s get back to the Jazz game. So there I am, sitting on a toilet in a stall completely dressed for an excessive amount of time and I decide that I love my husband. Not that I’ve ever not loved him because let’s be honest from the day I set eyes on him I had to have him. I just decided that I love all of the stupid, annoying, obnoxious, non-hurtful things that make him who he is. I love that his laundry doesn’t make it in the hamper because he works so hard all day to take care of us that he’s to tired to even think about where his clothes end up and tosses them on he floor before crawling into bed. I love that at 7 AM in the morning when I’m wishing that I was still in bed that he’s driving me nuts with all of his energy because he’s happy to have another day. So I leave the bathroom and head out to the game, never mind that it’s the fourth quarter and I’ve wasted 3 others being mad at some woman who doesn’t matter, but I am on my feet. “LETS GO BOYS!” She glares. I smile. “LETS GET THE WIN! NICE BOARD RUDY!” This time it’s me yelling.  We scream our way through a close game together that night, me a little out of my element but him completely in his.

Ultimately it’s just one of those things that made me realize that my husband wasn’t waiting for the fourth quarter of our lives to enjoy me and our marriage and our life. He’s enjoys it now annoying parts of me and all. No more waiting until the fourth quarter for me. No matter how loud he is.

21 thoughts on “To the rude woman who taught me to more fully appreciate my husband. ” 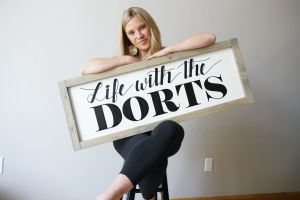